The children of the primary school in Triefenstein went on a special trip on the 9th of May 2018: To a later quarry from Heidelberg Cement. They heard a story about the primitive ocean, which is the matrix of the accumulated coquina today. As an evidence, spectacular acid tests were performed and they even searched for fossils.
After the historic part, the kids learned about the present- the valuable secondary habitat. Just on order, all the participants were able to witness an eagle owl mother and two of her infants from some distance.
The tour lasted for two hours and fortunate about their luck, the class left the quarry. 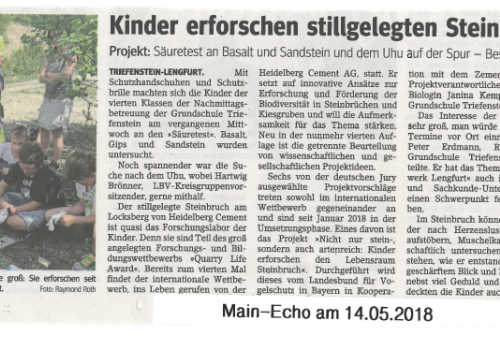